Propeller-spinning: An Interview with Chris Myles 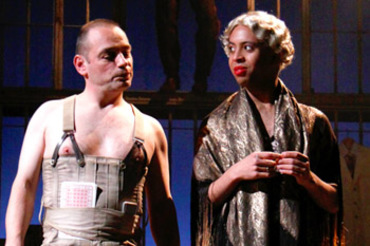 The issue of “all-male companies” has been raised again recently with Jo Caird, in a blog for whatsonstage.com, highlighting the “underrepresentation of women on the stage” and affirming that she would boycott the work of all-male companies. What’s Myles’s take? “We’re doing the plays as they were done originally. And there are things in them that resonate in a different way when it’s a male actor saying those lines as a female character. There’s a reason that so many of Shakespeare’s heroines cross-dress and it’s because boys were originally playing these roles... I should also point out that women are very present in Propeller, from our stage management team to our executive producer, Caro MacKay.

“When this issue comes up at talkbacks we often say, ‘Well, why not do an all-female production, like the Kathryn Hunter and Janet McTeer Taming of the Shrew?’ Many people say that Kathryn Hunter’s Lear was the best they’ve ever seen, and the same with Fiona Shaw’s Richard II…

“That being said, I do have female friends in the business who will comment ‘So you’re playing another role I’d love to play.’ Sometimes all you can say in response is ‘Sorry…’

Does he approach playing a female character differently in any way? “No. I think that the biggest mistake you can make is to think that you have to approach it differently. Acting always requires a ‘leap’ of some sort: of age, of ability. Gender is no different.”

Myles, who is also a local councillor in Hackney, was drawn to acting from a fairly young age, and recalls being inspired by his father who performed with an amateur theatre group. “I remember going to see him in a farce. He got a lot of laughs, and I was impressed by that. Then I did plays at school. And at University I found that I wasn’t going to lectures but I was going to rehearsals. So it became clear that that was where the interest lay.”

Most Propeller followers have a wish-list for future productions. Does Myles have a longing to do certain plays or to take on certain roles? “Hamlet and Iago. Of course most actors would say those two, but it doesn’t hurt to mention them in print, just in case your director happens to be reading.

“I also think that it would be fascinating to see Propeller do a non-Shakespeare play. I think that’s something that will happen, long-term. There’s no reason why our ways of working on Shakespeare wouldn’t work for a range of other plays.”

With such an expansive vision for the future in prospect, and actors as talented and versatile as Myles on board, Propeller, it seems certain, will keep spinning creatively for many years to come.

Propeller tour Henry V and The Winter’s Tale until July this year. See the Propeller website for full dates and details, and catch them wherever you can.