Belgrade apprentice scheme in a class of its own 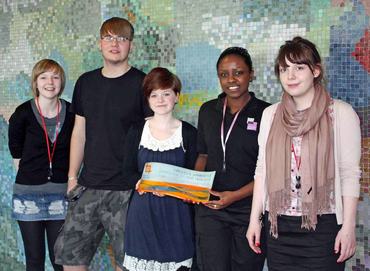 The National Skills Academy has named Coventry's Belgrade Theatre the Creative Apprentice Employer of the Year in recognition of its apprenticeship scheme which currently employs seven apprentices.

The award was presented at the National Skills Academy's third annual industry conference in Salford.

The Belgrade's general manager, Janthi Mills, said, "We're delighted to have won this award. By offering hands-on training we can ensure we're able to build an appropriate and fit-for-purpose workforce while nurturing the next generation of theatre professionals."

The Belgrade started its creative apprenticeship scheme last year because of the increasing number of applications it was receiving for work placements.

Apprentices now make up 15% of the theatre's workforce. Posts last for 11 months and provide paid experience in various areas within the theatre.

Rosie Mackie, the Belgrade's communications apprentice, said, "This apprenticeship has allowed me to enter into an industry which I thought would be almost impossible to get involved in as it's so competitive."