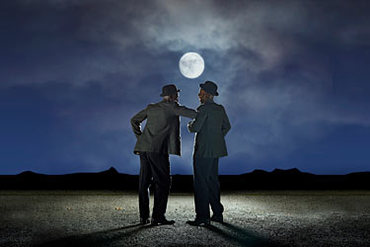 Trinidadian Jeffery Kissoon (Vladimir) works regularly with the RSC and will play Caesar in its all-black cast production of Julius Caesar this summer.

He performed opposite Kim Cattrall in Antony and Cleopatra at Liverpool Everyman last year and was an associate artist at Birmingham REP during the ‘90s playing leading roles in Othello, Macbeth and The Tempest.

Talawa Theatre Company is recognised as Britain's foremost black-led theatre company. Since its inception it's mounted more than 40 productions including African, Caribbean, American and British classics and new writing.

The company is celebrating its 25th anniversary and Waiting For Godot is its final production under the leadership of artistic director Patricia Cumper.

Waiting for Godot is directed by Ian Brown with design by Paul Wills, lighting design by Chris Davey and sound design by Ian Trollope.

It runs at the Old Rep in Station Street, Birmingham from Tuesday until Saturday.