Jim scores in a new role 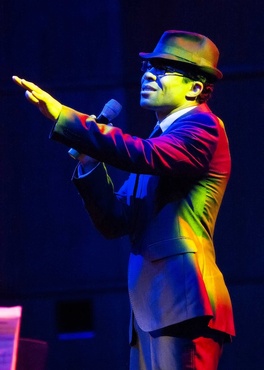 These days his audiences are seated in concert halls rather than Premiership football stadiums.

Jim's blossoming career as a footballer—he was also an international, playing for Northern Ireland—was cut short through injury. He then reverted to his musical roots to portray Nat King Cole in a touring stage show production.

This crooning career really took off when he took on the role of Sammy Davis Jnr. He joined the Rat Pack Live from Las Vegas tour as Sammy, working with the full West End cast.

He is now touring with the hit stage show Rat Pack Live, in the busy touring production alongside star of the West End Rat Pack show Mark Halliday as Dean Martin, and film and TV star Richard Shelton as Frank Sinatra.