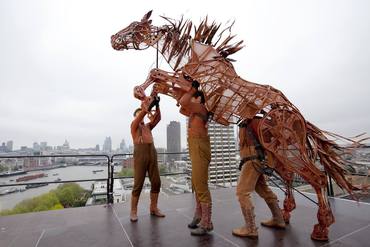 Joey, the Handspring Puppets horse from the National Theatre's production of War Horse saluted the Queen during the Thames Diamond Jubilee Pageant.

As the Queen passed the National Theatre, puppeteers Michael Brett (hind), Matt Tait (heart) and Stephen Harper (head) helped Joey raise a salute from the top of the flytower of the Olivier Theatre.

War Horse, from the book by Michael Morpurgo, is now in its fourth year in the West End at the New London Theatre and is also running on Broadway at the Lincoln Center’s Vivien Beaumont Theatre and at the Princess of Wales Theatre, Toronto.

It will open at the Melbourne Arts Centre's State Theatre in Australia in December and will tour the US from this month and the UK in autumn 2013.