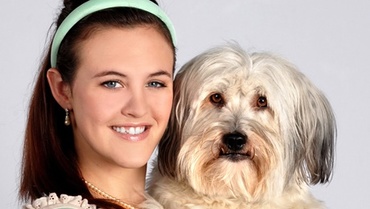 New Victoria Theatre, Woking has announced its autumn season, including this year’s pantomime Dick Whittington where Britain’s Got Talent winners Ashleigh and Pudsey (hailed by Simon Cowell as one of his favourite ever acts) will make their theatrical debut.

Ashleigh plays Dick’s love interest Alice Fitzwarren, with Pudsey at her side. Joining them is TV presenter, entertainer and magician Stephen Mulhern as Idle Jack.

“We are so excited to be performing in our first pantomime,” said Ashleigh. “Drama and dance have been a big part of my life for many years and my grandma has taken us to pantomime every Christmas for as long as I can remember”. Pudsey said “Woof, woof, woof”. 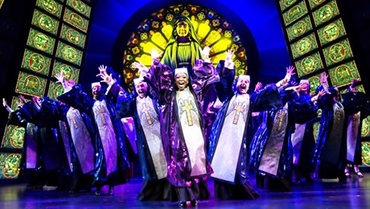 The musical Sister Act, based on the film of the same name and starring Denise Black, Michael Starke and introducing Cynthis Erivo as Deloris Van Cartier, is from 28th August to 8th September.

Based on Dolly Parton’s hit movie, 9 to 5 The Musical features Dolly’s original hit title song as well as 18 original numbers that mix Broadway and pop with Dolly’s signature witty lyrics. Starring Natalie Casey, Ben Richards and Bonnie Langford, it runs from 5 to 10 November.

After the success of their inaugural production Dandy Dick, the Theatre Royal Brighton Productions bring the multi-award winning Blue/Orange to Woking from 16 to 20 October.

Alan Ayckbourn’s haunting study of grief, obsession ad the supernatural, Haunting Julia, is from 11 to 15 September, and a spectacular new production of Charles Dicken’s classic Great Expectations is from 18th to 22 September.

Through October and November, pop music fans are catered for with Top of the Pops Live, Marty Wilde’s Rock ‘n’ Roll Party, The Drifters in Concert, The Rock Tour, the Queen tribute Mercury, The Billy Fury Story and The Rat Pack Vegas Spectacular, and comedy has its turn with Dara O’Briain, Craic Dealer, Jimmy Carr, Rhod Gilbert, Jethro, Alan Davies, the Hairy Bikers and Jack Dee, while Fascinating Aida bring their Cheap Flights Tour to round off November.