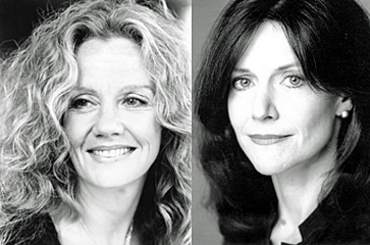 Hayley Mills and Belinda Lang star in the world premiere stage production of Ladies in Lavender which opens at the Royal, Northampton this week.

William J Locke wrote the original short story. Charles Dance turned it into a film which featured Judi Dench and Maggie Smith as the sisters Ursula and Janet.

They live in a fishing village in Cornwall in 1937 and their lives are disrupted by the arrival of a handsome Polish-Jewish violinist who is washed ashore.

Hayley Mills who's been a regular on ITV's Wild at Heart for the past five years takes the role of Ursula.
Belinda Lang, known for her role in the television series 2 Point 4 Children, plays Janet. She recently appeared in The Killing of Sister George at the Arts Theatre in the West End.

The cast also includes Robert Duncan, known for playing Gus in the Channel 4 series Drop the Dead Donkey; and Carol Macready who was in J B Priestley's Eden End on the Royal stage last year.

Ladies in Lavender has been adapted for the stage by Sean McKenna and features Nigel Hess's music from the film which earned him a Classical Brit.

Robin LeFevre directs the production which opens on Friday (6 April) and runs until Saturday, 28 April before going on a national tour.