Claire and Wendi all white for Lowry 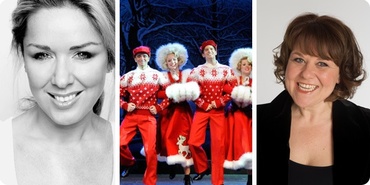 Claire Sweeney and Wendi Peters will take on the roles of Betty Haynes and Martha Watson when spectacular stage musical White Christmas, based on the 1954 movie, returns to the Lowry in Salford this Christmas.

The former has had great reviews for her starring role in a UK tour of Educating Rita while Wendi is probably best known for her role as Cilla Battersby on Coronation Street but has a wealth of experience on stage and screen.

David Fry, Lowry's head of theatres programming, commented: "Landing Claire is fantastic news as she's the consummate singer / dancer / performer. Wendi too is a brilliant character actress and perfect at comedy. They're both ideal for this wonderful show. We also look forward to announcing male casting in the near future."

Irving Berlin's White Christmas The Musical returns for five weeks only following a critically acclaimed, record-breaking sell-out run in 2009 when the show made its North West debut at The Lowry.